Check out this press release regarding the endorsement of PinkWood by Mike Holmes!

Blair Nutting, VP of Sales & Marketing for PinkWood was in Toronto for the filming of the first episode of the new television show “Make it Right” last Tuesday.

The new show airs in September and Mike Holmes intends on featuring PinkWood on as many episodes as possible. The show airs in 76 countries including the US and Canada. 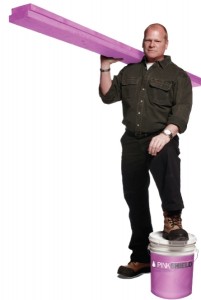